Cora Carmack’s Roar is a book that has been on my radar for a while because the weather-based magic system sounded really cool. I finally made time for it this month, as it’s the chosen book for Chelsea Palmer‘s Page Turners book club. It’s perfect timing, as the sequel, Rage, is being released on August 27th (and yes, I’ve already pre-ordered it!).

Roar takes place in a fantasy world dominated by storms. These powerful storms are controlled by Stormling families, who use stormhearts (stones gathered by besting various types of storms) to do so.

Aurora Pavan is a princess and the heir to the Pavan empire, and as such is meant to have storm magic. However, Aurora has kept her lack of magic secret from the world. When we meet her in the story, she’s about to be wed to Cassius, one of the princes from the Locke kingdom, and Aurora is nervous about his finding out that she does not have storm magic. Aurora decides to flee her castle prior to the wedding and join a roaming band of storm hunters after learning that even people born without innate magical abilities are able to learn magic.

I loved this book and was disappointed that I would have to wait a month to read book two. This is the second fantasy book I’ve read that involved weather and storms in a major way (the first being Brandon Sanderson’s Stormlight Archive series), and that’s something that has excited me so much. Why? Because I’ve been obsessed with the weather since I was in second grade.

When I say I was obsessed, I mean it. I once wrote a fan letter to a local news meteorologist. I’ve always wanted to be a meteorologist and, if I can ever figure out how to pay for it, will go back to school to do so. When I was a child I was somewhat afraid of storms (especially severe thunderstorms), but that fear eventually grew into an intense fascination. In third grade, my classroom had a computer game where you could make your own forecast maps, and I dominated that computer. My teacher would have to make me get up in order to give my peers a chance to play something. Also, I’m still just as obsessed. I have a really expensive hobby of buying and reading atmospheric science textbooks for fun.

Anyway, I really like weather. The storm magic in this book was really well-done and interesting and made this young adult fantasy novel really stand out in what has become a very saturated market. In the novel, we start to learn that Aurora reacts strangely to storms, and the mystery of why kept me consuming the novel as fast as I could to discover the answers. 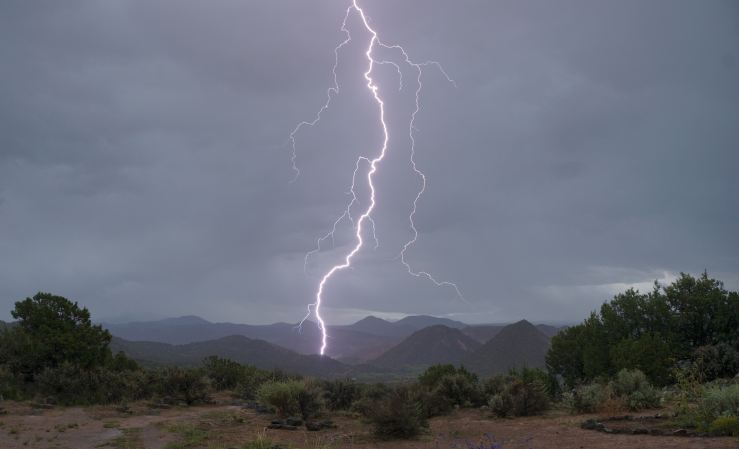 The characters in the book are a lot of fun, especially the band of storm hunters that Aurora joins up with. They’re all very distinct characters, and I hope we learn more of each of their backstories in Rage. The only character that I took some issue with was Locke, Aurora’s love interest and the person tasked with training her to become a hunter. He was rough in his handling of Aurora and was often cruel to her for no reason except some baggage that he was carrying from his past, and that rubbed me the wrong way.

Throughout the novel, Aurora keeps her real identity a secret from the group of storm hunters that she’s joined up with. Going by Roar instead of Aurora, all they know about her is that she has really bad trust issues and reacts strangely to storms. This aspect of her character did annoy me after a while, as she learns so much about the other people that she’s traveling with, but she refuses to tell them anything about herself. After a while, her trust issues and secrecy got a bit annoying, especially since it seems to all be based on the one week or so that she knew her husband-to-be Cassius, and she found out that he wasn’t marrying her for love (which, no shit. You’ve never met one another, so of course, it’s a political marriage).

One last note, I feel like Cora Carmack may have pulled a little too much from Marvel’s storm goddess, Storm. Why? The similarities are pretty obvious. Aurora Pavan vs Ororo Munroe, both have stark white hair, both of them control the weather. The character just made me think so much of Storm, but perhaps that’s just because I’m a huge Marvel fan and Storm is one of my top five favorite X-Men characters.

If you want to read an original, exciting young adult fantasy novel, look no further. Roar will satisfy you immensely, and hopefully, leave you wondering how in the hell you’re going to wait until the end of August to find out what happens next.

Have you read Roar? What did you think? Let me know in the comments!

8 thoughts on “Roar by Cora Carmack – A Review”