“The firm footing of rational thought has its place, Watson, but when dealing with the enchanted one must take the occasional leap of faith.” 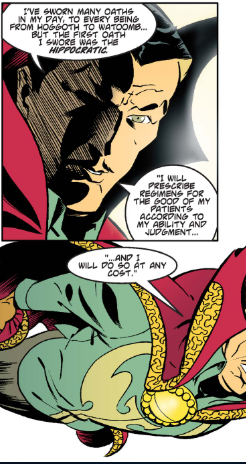 The Oath is a five-part comic series that was released in 2007 and was written by Brian K. Vaughn (most recently known for his work on Saga), with art by Marcos Martin.

Doctor Strange discovers that his faithful assistant and best friend, Wong, has a very rare and untreatable brain tumor, and is determined to use every resource at his disposal to find a cure. During his quest, he discovers a powerful, magical potion, known as Otkid’s Elixir.

Before he can administer the potion to Wong, Doctor Strange is shot and the potion is stolen. Wong drags Doctor Strange to the office of Night Nurse, who is actually a doctor, where she works to save Strange’s life while being pestered by his astral form.

Brigand is the name of the petty criminal-for-hire who shot Strange and stole the elixir, but Doctor Strange can sense that something’s not quite right. He shouldn’t have been taken down by someone as weak as Brigand, so who’s helping him? Mephisto, Nightmare, Mordo, Dormammu… there are so many people that could be behind this.

Doctor Strange, Wong, and Night Nurse team up to try to get the elixir back, discovering it’s true nature, and being forced to make a life-or-death decision.

Doctor Strange is my favorite Marvel character, and since discovering Marvel Unlimited (which is amazing), I’ve been catching up on his backstory. I’m disappointed that it took me so long to get to this particular series because I really enjoyed it.

This series is one of the prime examples of what I love so much about Doctor Strange. He’s brilliant but rash and has learned from the mistakes of his past. There are plenty of quirky, funny moments, and Doctor Strange easily makes a name for himself as one of the most powerful figures in the Marvel universe.

The art by Marcos Martin is wonderful, and below are a few of my favorite panels. I particularly love the way Nightmare is drawn in this series:

One aspect of the story that I liked was the commentary on the evils of the pharmaceutical industry. Much of the story is Doctor Strange fighting a representative of Timely Pharmaceuticals, who may have a bit more up his sleeve than just a medical degree.

Most comic books, especially those published by Marvel, start with a general introduction to the story, summarizing the previous few issues and a very brief biography of the character. Much of the time, it’s basically the same page in each individual issue, with a few minor adjustments made here and there as the story unfolds, but I really appreciated that in The Oath each issue has a unique introduction page. In most comic series I actually skip over that page, especially if I’ve been following the story since issue 1, but for this one, I ended up reading and enjoying the introductions.

My favorite thing about this series is that it’s a story of the friendship between Doctor Strange and Wong, and Strange’s promises to his friends and patients. Wong has always been an integral part of every Doctor Strange series, but this particular one does a great job of showing that.

I’m giving this series a 5 out of 5 stars. I loved so much about it, and since it’s only five issues, it’s short enough to re-read frequently. This is a wonderful place to start if you’re new to Doctor Strange comics.

Are you a Doctor Strange fan? What’s your favorite issue or series?

5 thoughts on “Doctor Strange: The Oath – A Comic Series Review”